More Than Half of Hotel Pools Tested Failed Bacteria Testing

The next time you consider taking a dip in the hotel pool that looked (and possibly smelled?) a little ‘off’, or, even worse, soaking in a hot tub that you didn’t think looked (or possibly smelled?) the way it ought to… think about this: A recent ‘surprise’ testing spree conducted on 11 hotel pools in a South Dakota area turned up (6) six pool with unsafe levels of bacteria. ( source )

For those not good with numbers, more than half failed the testing and that means unwitting registered guests of those hotels could have subjected themselves (and worse) their families to potentially unsafe swimming conditions and not have known it.

Worse, yet? Sometimes the illnesses picked up from one spot (i.e. pool, spa, water park, etc.) do not manifest themselves until several days or a week later and unknowing infected swimmers frequent more than one pool… Need we say more?

Regardless of your answer to that question, we will continue because not enough people concern themselves with healthy swimming practices — and that concerns us.

Before joining our staff a member of our team contracted a rather unpleasant (and itchy!) skin condition after having a few too many poolside and beach-side cocktails after immersing himself in a hot tub that, in his own words, ‘did not look right’. About four days after the bumps, redness and itching started… and boy did he not enjoy several trips to the doctor as they tried different creams, antibiotics and anti-fungus medications in an effort to clear up the rash that had formed in both creases of his legs right where, as he phrased it, ‘the naughty bits began’.

So, the next time you think, “oh, they have someone who takes care of the pools” and consider hopping in a public pool or hot tub at a hotel, consider these simple things:

While the above few tips will not guarantee you a safe and bacteria-free swimming experience when visiting a hotel and considering taking a dip in the pool or soaking in the hot tub, keeping them in the back of your mind surely won’t hurt. 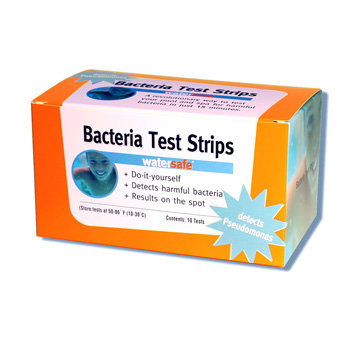 Can the average person test for bacteria in pool water?

Yes. The WaterSafe Pool & Spa Bacteria Water Test Kit puts the power of on-the-spot pool/spa water testing for potentially harmful bacteria such as Pseudomonas, Aeromonas, E.coli, certain species of Salmonella, Shigella, Enterobacter, Klebsiella and a variety of other Coliform and non-Coliform bacteria into the hands of those who need it most: People unsure about the quality of water in an unfamiliar pool or spa.

Planning a trip that may involve multiple stops and possibly multiple public pools? The WaterSafe Pool & Spa Bacteria in Water Test Kit contains 10 tests and each test takes less than 20 minutes to perform.

In the time it takes to make sure the kids have adequate sunscreen on and have their arm floaties properly attached… you have the time required to make certain the water does not contain an unhealthy amount of potentially infectious and dangerous bacteria.