Yesterday we touched on water quality issues in California involving unsafe levels of Chromium-6, a known carcinogenic compound, in well water. Today we sadly report that the same region of the country, Coachella Valley, California, also has troubles with higher than desired concentrations of arsenic in well water.

In addition to high levels of chromium-6 found across the Coachella Valley, residents in east valley also cope with high well-water concentrations of another naturally occurring element: arsenic.

Thousands of residents live in areas that contain hazardous levels of arsenic in their groundwater, a problem that would cost millions to remedy.

In January 2010, Riverside County environmental health officials knew of wells at 19 mobile home and RV parks that had tested positive for dangerous levels of arsenic ranging from 12 to 91 parts per billion, a Desert Sun probe found.

Studies have linked arsenic, a naturally occurring tasteless and odorless element, to risks of cancer when ingested over decades at levels of more than 10 parts per billion, according to state and federal health officials. Children are even more susceptible because of their low body weight.

For those who do not already know, “The USEPA has determined that ingesting arsenic in too high a quantity can make a person very ill and possibly even cause death. Throughout history, and possibly even in some countries today, you can find arsenic listed as an ingredient in mouse and rat poison. Additionally, the USEPA classifies arsenic as a carcinogenic compound.” ( source )

As usual we will bring up one of our favorite water test kit lines, the Arsenic Quick line of home, field and industrial water testing kits for As+3 and As+5 dissolved in water.

We like this product Arsenic Quick product line for several reasons including, but not limited to, its use of food grade reagents for improved safety, its fast and easy testing procedures, its ability to detect very low concentrations w/o the use of a meter, and its affordability.

For under $20 the average person can get a test kit that will let them know if their well water contains unsafe levels of dissolved arsenic and the testing won’t take more than around 15 minutes.

For those in need of more definitive and potentially more legally defensible water testing options, contact your local health department for a list of local laboratories certified to perform the sort of water testing you require. And, as always, if no local labs exist, companies like National Testing Laboratories offer comprehensive water testing packages that include tests for a large number potential of water quality contaminants and critical water quality parameters.

Other, more robust 4 and 5 stage reverse osmosis systems such as the Goldline 5-Stage Reverse Osmosis System also bear the NSF 58 mark and include additional features such as pre and post carbon block filters for additional water polishing. 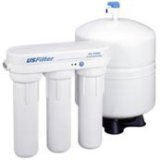 « Chromium in Well Water a Reality in California
Who Do I Contact for Well Water Testing? »