Today's inquiry came to us from 'K McG' who asked, "Got well with high iron level, maybe also due to old plumbing with galvanized pipes. Droppped 2" x 12" x 3' treated wood in well. Immersed 1 mo. until fished out/removed. Have run water to dilute any leached arsenic many times. Will your arsenic test kit (5) give accurate results to determine safety for drinking water?"

To our knowledge, the iron in your well water ought not cause a problem for the Arsenic Quick Test Kit.

We have heard of only one common well water component that causes know interference with the Arsenic Quick line of water test kits: Hydrogen Sulfide.

Arsenic Quick test kits eliminate (negate the effects of) lower amounts of hydrogen sulfide in a water sample but hydrogen sulfide levels in excess of 2 mg/L (ppm) will interfere with testing.

As for which Arsenic Quick Test Kit to choose, we suggest opting for one with a wide detection range (i.e. one that starts below the EPA action level of 10ppb and can also detect levels much higher than 10ppb).  For most people looking to get a general feel for how much, if any, arsenic their water contains, the original Arsenic Quick Test Kit (packaged as 2 test, 5 test and 100 test versions) works quite well.

Yesterday we touched on water quality issues in California involving unsafe levels of Chromium-6, a known carcinogenic compound, in well water. Today we sadly report that the same region of the country, Coachella Valley, California, also has troubles with higher than desired concentrations of arsenic in well water.

In addition to high levels of chromium-6 found across the Coachella Valley, residents in east valley also cope with high well-water concentrations of another naturally occurring element: arsenic.

Thousands of residents live in areas that contain hazardous levels of arsenic in their groundwater, a problem that would cost millions to remedy.

In January 2010, Riverside County environmental health officials knew of wells at 19 mobile home and RV parks that had tested positive for dangerous levels of arsenic ranging from 12 to 91 parts per billion, a Desert Sun probe found.

Studies have linked arsenic, a naturally occurring tasteless and odorless element, to risks of cancer when ingested over decades at levels of more than 10 parts per billion, according to state and federal health officials. Children are even more susceptible because of their low body weight.

For those who do not already know, “The USEPA has determined that ingesting arsenic in too high a quantity can make a person very ill and possibly even cause death. Throughout history, and possibly even in some countries today, you can find arsenic listed as an ingredient in mouse and rat poison. Additionally, the USEPA classifies arsenic as a carcinogenic compound.” ( source )

As usual we will bring up one of our favorite water test kit lines, the Arsenic Quick line of home, field and industrial water testing kits for As+3 and As+5 dissolved in water.

We like this product Arsenic Quick product line for several reasons including, but not limited to, its use of food grade reagents for improved safety, its fast and easy testing procedures, its ability to detect very low concentrations w/o the use of a meter, and its affordability.

For under $20 the average person can get a test kit that will let them know if their well water contains unsafe levels of dissolved arsenic and the testing won’t take more than around 15 minutes.

For those in need of more definitive and potentially more legally defensible water testing options, contact your local health department for a list of local laboratories certified to perform the sort of water testing you require. And, as always, if no local labs exist, companies like National Testing Laboratories offer comprehensive water testing packages that include tests for a large number potential of water quality contaminants and critical water quality parameters.

Other, more robust 4 and 5 stage reverse osmosis systems such as the Goldline 5-Stage Reverse Osmosis System also bear the NSF 58 mark and include additional features such as pre and post carbon block filters for additional water polishing.

Traces of Arsenic Found in Well Water Near Elementary School

As the title stated, routine testing of well water yielded startling results… near an Elementary School in Durham, Connecticut.

DURHAM — Traces of arsenic in some of the town’s wells have prompted the Department of Health to encouraging residents to test their water, according to a press release posted on the department’s website.

People who live or work around Brewster Elementary School are advised to have their water tested within the next three to six weeks. The department is also asking residents to fill out and submit a report — also on the department’s website — so officials can determine the extent of contamination.

Arsenic, which causes health problems like skin discoloration (melanosis), hardening of the skin (keratosis) and cancer, can contaminate groundwater naturally and through human activities such as mining. It can also come from pesticides and fertilizers that contain arsenic. ( source )

Health officials went on to say that although certain area wells did show elevated levels of arsenic contamination, people do not need to get alarmed just yet. They do not have enough test data to reach any firm conclusions and would like the private well owners to lend a hand and by conducting testing and reporting the results via a form currently available on the Durham Department of Health web site.

For those not aware of the dangers arsenic in drinking water may pose, take a look at some of the prior articles posted on this site:

Can the general public perform arsenic testing on its own safely?

Absolutely. The Arsenic Quick™ line of arsenic in water test kits offers allows users to quickly and accurately test for dissolved arsenic (As3 & As5) in drinking water in as little as 12 minutes.

Below you will find links to the three most popular Arsenic Quick™ test kits offered in our Water Test Kit Store:

For more information on Arsenic Quick Test Kits, take a look in the Arsenic Testing section of our Water Test Kit Store.

Private well owners in Monroe County, NY received some troubling news recently from their local board of health. A number of private wells in the area tested positive for arsenic in a big way.

For those unfamilar with arsenic,

In a nutshell, arsenic in ground water comes from a reaction between certain types of igneous (volcanic) rock and oxygen when a water table (aquifer) drops. That reaction liberates ‘free’ arsenic and once the water table rises again, that ‘free’ arsenic gets carried away by the water.

As for whether or not arsenic in drinking water can harm a person, the United States Environmental Protection Agency has stated that water systems may NOT dispense drinking water with arsenic in concentrations greater than 10 ppb as of January 2006. ( source )

Getting back to the article about high arsenic levels inthe Rochester, NY area, the Democrat and Chronicle published the following article on July 2, 2009:

All private-well owners in Monroe County should test their supply for the toxic metal arsenic, the county health department said this morning.

The department is making the recommendation as a result of the discovery of arsenic in dozens of private wells in west Webster, at levels as much as four times higher than the drinking-water guideline, spokesman John Ricci said.

As the Democrat and Chronicle reported last month, officials are unsure of the source or scope of the contamination, which first came to light last fall. Some affected Webster residents had criticized the county and town governments for not publicizing the problem and reacting more aggressively to it.

The recommendation issued this morning is that each of the 5,000 or so well-owners in the county test their water at least once for arsenic. The health department also is recommending annual testing for coliform bacteria, nitrates, sodium and turbidity.

Those relatively common constituents are what well-owners typically test for on their own. Most well-owners would not have their water tested for arsenic unless warned they should do so, experts have told the Democrat and Chronicle.

There are no state or local laws that require testing of wells in Monroe County.

Private laboratories, as well as the health department, can conduct the tests. The department would charge $115 for all the recommended testing, and $80 for the arsenic work by itself, Ricci said. ( source )

While no form of at-home or field testing of drinking water will ever take the place of drinking water analysis performed by a certified water testing laboratory, the need for quality field arsenic does still exist — and the Arsenic Quick Test Kit fills that need quite well.

Several of the Arsenic Quick Test Kits have had their perfomance and accuracy verifed by the USEPA through the ETV program ( www.epa.gov/etv), testing takes no more than 12 or 13 minutes to complete, the cost per test for some of the Arsenic Quick Test Kits gets below the $10 mark, and detection levels of some kits reach levels far lower than one would expect from a field-ready arsenic test kit.

As many of you already know, the Federal Government lowered the ‘acceptable’ level of free-dissolved arsenic in drinking water served by public/municipal water systems from 50ppb to 10ppb.  But, did you know this decision had little to no effect or bearing on private well owners?

Why is that?  Simple:  No laws require that their owners test them for continued water quality once they get approved for use.  That means a well which passed muster for arsenic (and other contaminants) three years ago may now contain dangerous levels of contaminants and no one knows it.

What can a private well owner do?  They COULD send their water out for laboratory analysis, which could cost them a pretty penny OR they could pick up an easy-to-use, accurate field test kit for arsenic in water like this: 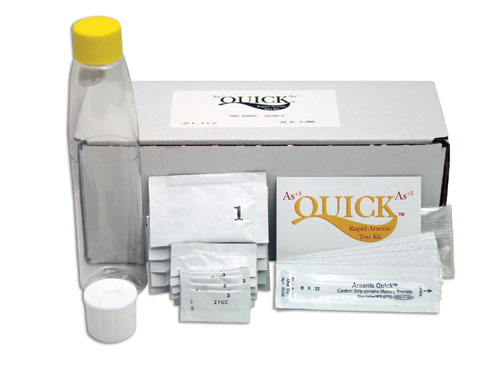 Also, for those of you interested in testing down to even lower levels, we recommend you consider the other easy-to-use, field-ready home water test kits for arsenic in the Arsenic Testing section of the Water Test Kit Store.  Each kit shares the same reliability, accuracy and dependability as the original Arsenic Quick kit and uses the same proven chemistry.

For those with more extensive testing needs, all the above kits (and more) come in larger sizes. Find more information on the full line of Arsenic Quick test kits. . . Here.