Ever go to a beach and find warning flags or signs warning swimmers, surfers, etc. to stay out of the water and wonder why? Most likely the prior day’s water test results for potentially harmful bacteria came back high and health officials made the decision to close the beach until the spike in bacteria activity dissipated.

For those who need a bit more ‘proof’ that a trip to the beach could, in fact, land you or a loved one in some serious gastrointestinal trouble, you will find an excerpt from the NRDC’s (National Resources Defense Council) annual report on beach water quality.

NRDC’s annual analysis of water quality and public notification data at coastal U.S. beaches found that the number of beach closing and advisory days in 2011 reached the third-highest level in the 22-year history of our report, totaling 23,481 days (a 3% decrease from 2010). More than two-thirds of closings and advisories were issued because bacteria levels in beachwater exceeded public health standards, indicating the presence of human or animal waste in the water. The portion of all monitoring samples that exceeded national recommended health standards for designated beach areas remained stable at 8% in 2011, compared with 8% in 2010 and 7% for the four previous years. In addition, the number of beaches monitored in 2011 increased slightly (2%) from a five-year low in 2010. The largest known source of pollution was stormwater runoff (47%, compared with 36% last year). The 2011 results confirm that our nation’s beaches continue to experience significant water pollution that puts swimmers and local economies at risk. ( source )

As inconvenient as a beach closure may seem for folks on vacation or who may have just driven a few hours to spend the day frolicking in the water with sand between their toes, the idea of spending the next week battling illnesses caused by the accidental ingesting of harmful bacteria in water at the beach sounds a heck of a lot more inconvenient — and potentially fatal.

So, if you make a trip to the beach and see signs advising you to stay out of the water due to elevated bacteria counts, we suggest that you heed the warnings and seek watery enjoyment elsewhere. 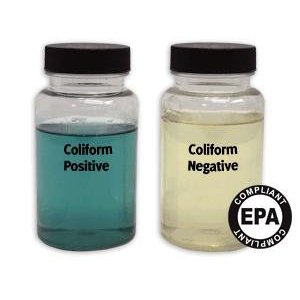 The average person could also have an unwanted encounter with potentially harmful bacteria in their drinking water — especially if they rely upon well or ground water. Bacteria can find its way into aquifers for any number of reasons, seals on sealed well systems could develop leaks, and/or chemical feed systems (if installed) could malfunction… all without warning.

Periodic well water testing with products such as the EZ Coliform Cult (MUG) Test can greatly reduce the likelihood of your unknowingly consuming potentially harmful strands of coliform bacteria in your drinking water.

As we always like to say, It’s your water, your health… and ultimately your LIFE!