Several people have asked why we have not talked about water… in aquariums. No particular reason, really, other than not enough people had asked for that sort of information — until now.

Many people have the wrong idea about how much maintenance and testing a healthy aquarium requires. Notice we said, “healthy.”

An UNhealthy aquarium requires next to no maintenance. Simply add water to the tank, throw in some fish, wait for fish to die, scoop up dead fish, re-stock tank with live fish, and repeat the last two steps until common sense kicks in.

Eventually people catch on to the fact that an aquarium needs more attention than just adding fish and dumping in food once in a while. It takes some people longer than others to figure that out, true, but we can discuss that topic another time. For right now let’s stick to the topic at-hand: Testing Aquarium Water so that your fish don’t keep going belly up.

As you can see from the above test kits, you will have to test for a number different water parameters if you want to keep your fish healthy, happy and alive. Thankfully most aquarium test kits these days come with easy-to-follow instructions and the average person can complete the testing in just a few minutes.

Which water parameters matter most? Hard to say, but many pond and aquarium experts agree that a person ought to keep a close eye on the following water quality parameters if they hope to have clean, healthy water for their fish to live in: 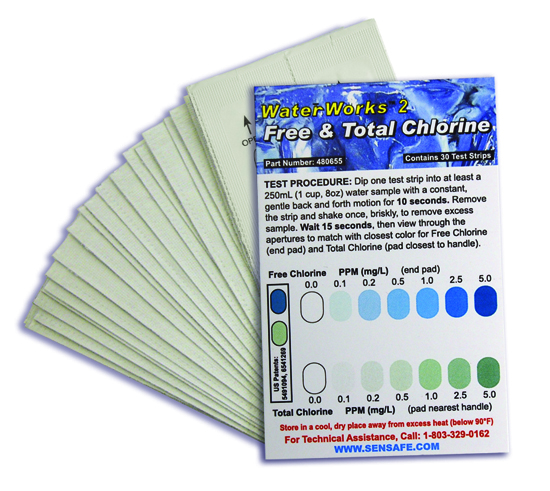 Many people do not know that chlorine in water comes in three basic varieties: Free, Combined and Total.

OK, So What is This Total Chlorine?

Simply put, total chlorine is the sum of the free chlorine plus combined (used) chlorine in the water. See the following equation:

The USEPA has set the Maximum Contaminant Level (MCL) for TOTAL chlorine in potable water at 4.0 ppm.

This means water dispensed by a water system must contain less than 4.0 ppm total chlorine… or the system is in violation of Federal Law and subject to getting fined and/or shut down by the USEPA if their total chlorine readings continue to exceed Federal Guidelines.

As a general rule, most water treatment facilities use a method called “DPD Testing” to determine the chlorine concentrations in drinking water. Other methods for testing exist, though most are not officially approved by the USEPA and may not be used for reporting purposes.

As of Spring 2007, though, the USEPA began allowing states to approve the use of an alternate, yet equal, faster method called SenSafe(tm) Free Chlorine Water Check when testing for free chlorine residual.

That same company also manufactures a dip-n-read test strip for total chlorine referenced by the USEPA only as a screening method for total chlorine concentrations in wastewater. [see Federal Register / Vol. 72 No. 47 / Monday, March 12, 2007 / Rules and Regulations]

You may also see combined chlorine called ‘chloramines’ in certain literature and some water systems actually use them to sanitize/disinfect the water they supply. Though not as effective a killing tool as free chlorine, they do get the job done.

If you wish to test for chloramines, you only need to perform two very simple tests and do some really easy subtraction: