Previously when we wrote about fracking (hydraulic fracturing) we stressed the importance of performing water quality testing on well water and ground water in the region before any fracking activity begins. Today we happily report that officials in the Sanford, NC area required baseline water quality test results get recorded before any gas companies could get permits to begin drilling.

Teams from the U.S. Geological Survey’s Water Science Center are fanning out across the county to assess the best places to test the groundwater. About 150 area homeowners have asked the USGS to test their wells, but officials said locations will be chosen based on scientific criteria.

“We haven’t sampled in this area since the 1960s, 1970s,” Melinda Chapman, a USGS groundwater specialist, said Wednesday.

State lawmakers are expected to consider legislation when they reconvene later this month that would allow gas drilling as quickly as 2014.

Environmental groups have expressed concern about the controversial drilling method of hydraulic fracturing, saying that they fear it could contaminate water sources in central North Carolina. ( source )

While the exact reason for a change in water quality cannot always get pinpointed and/or assigned to a particular cause, not having before drilling test results to compare against makes it easier for gas and mining companies to deny that their activities in an area have anything to do with changes in the environment.

Basic tests well owners can perform on their own?

Total Dissolved Solids (TDS) – This basic test checks for the presence of dissolved solids in a water sample. Spikes in TDS readings may occur on a regular basis but prolonged spikes with no apparent cause (i.e. heavy rains, etc.) may serve as an indicator that a new contaminant has entered the water source.

Heavy Metals – Since drilling involves a large amount of metal in its operations monitoring the level of heavy metals in ground/well water near hydraulic fracturing activity makes a lot of sense.

pH & Alkalinity – Keeping an eye on a water source’s pH and alkalinity also aids in determining if hydraulic fracturing activity in a region has had an effect on water quality. Sharp, prolonged changes in pH and alkalinity may indicate the possible presence of unwanted chemicals in the water source.

Meters like the pH-200 Waterproof pH Meter make pH testing about as easy as it gets. For those unwilling to spend the money on a meter, you can also use more traditional methods like pH & Alkalinity Test Strips.

Moral of the story?

Establishing the quality level of well and ground water in Sanford, NC prior to any fracking activity begins may give homeowners a leg to stand on if the quality of their water suffers after hydraulic fracturing begins.

It may also provide the gas companies with the evidence they need to ‘prove’ that hydraulic fracturing did not affect the quality of water in the area.

A double-edged blade, yes, but in our opinion a necessary one for any region considering issuing hydraulic fracturing permits to gas companies. 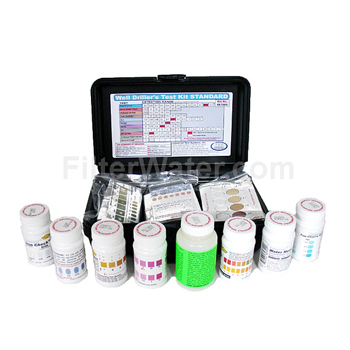 Over the past month or so we have posted a few blog entries talking about the practice of ‘fracking’ (hydraulic fracturing) and what some people believe it could do to the quality of water in surrounding areas.

Today we present an article detailing the findings of recent water testing in Pennsylvania that may cause some people — especially in Pennsylvania — to wonder if fracking makes any fracking sense.

While the article does not say that fracking definitely caused contamination of ground water near drilling sites, it certainly does, in our opinion, provide probable cause for more in-depth testing.

(CNN) — Water testing by a private environmental engineering firm has discovered toxic chemicals in wells in a township in Susquehanna County, Pennsylvania.

Victoria Switzer, a resident of the northeastern Pennsylvania township of Dimock, revealed the results of the water tests from her well this week at an Environmental Protection Agency hearing on hydraulic fracturing in Binghamton, New York.

Hydraulic fracturing, or “fracking,” is a controversial process used to extract natural gas from deep underground. Critics say chemicals used in the process can be injected into groundwater.

The tests, which were verified by three certified laboratories, found chemicals in the majority of samples taken from water wells in Dimock, said Daniel Farnham, president of Farnham & Associates, based in Scranton, Pennsylvania.

“For anybody to say this was occurring prior to drilling is ludicrous,” Farnham said Friday. “The water was not like this before.”

In 2008, Farnham was contracted by Cabot Oil and Gas Corp., the company working in the Dimock area, to perform pre-drilling tests on numerous wells in Susquehanna County, he said, adding that he did not test for nor discover ethylene glycol, propylene glycol and toluene.

Despite his latest findings, however, Farnham said he cannot reach any conclusions about the source of the chemical compounds found in the drinking water wells.

“Unfortunately no one can say that right now, until there is a way to track frac fluids,” he said. “And I think the gas companies know that.”

Ethylene glycol, propylene glycol and toluene are on the list posted on the Pennsylvania Department of Environmental Protection’s website of chemicals used by hydraulic fracturing companies in the state.

But George Stark, a spokesman for Cabot Oil and Gas Corp., said his company does not use the chemicals discovered by Farnham & Associates.

“When we look at the ingredients we use in fracking and completing of wells, these chemicals are not found. Toluene is not at all used,” Stark said. “If you look at what Dan said, he found these and he can’t trace these to fracking.”

“The fact is that we don’t use these chemicals,” Stark said.

The chemicals have a number of common applications and appear in products ranging from toothpaste to antifreeze, Farnham said. But they can be toxic in higher concentrations.

The Department of Environmental Protection is conducting its own water tests across Dimock, spokesman Tom Rathbun said.

Department water tests in April across Dimock for ethylene glycol and propylene glycol were negative, and the agency is testing for “toluene and a host of other constituents,” he said. ( source )

It strikes us as odd and peculiarly coincidental that a toxic chemical like toluene could find its way into an aquifer around the time that fracking took place in that area… and yet the drilling company claims they do not use toluene in their drilling operations… and yet, still, the Pennsylvania Department of Environmental Protection has publicly posted toluene as a chemical used in hydraulic fracturing.

The practice of hydraulic fracturing involves drilling vertically and then horizontally into shale formations thousands of feet below the ground and pumping large amounts of water mixed with sand and chemicals into the well using a lot of high pressure. The pressure of the material pumped into the well fractures the shale around the drilled well and allows natural gas to flow freely and get pulled (or some would say pushed) up to the surface for collection.

Ways to test at home?

Unfortunately the chemicals used in the fracking process…

That almost sounds obscene, does it not?

… cannot get detected by the average person at home unless they possess sophisticated equipment and have some sort of laboratory set up in their basement, back room or garage.

The average homeowner can, however, test basic water parameters whose values might change if contaminants have gotten into the aquifer supplying water to their well as a result of . The parameters include pH, Alkalinity, Total Dissolved Solids (TDS), Chlorides and Heavy Metals.

Changes in levels of the aforementioned water quality parameters would indicate that a change has taken place withing the aquifer, but those changes would not directly point a finger in any direction… though simply noticing and reporting significant changes possibly occurring as a result of fracking could get folks with more sophisticated equipment to take a closer look things.

We’ve said it once, we’ve said it a million times: It’s your water, your health… and ultimately your LIFE. Think of it like this… If you don’t care enough to spend a few minutes of your time each day/week test your well water, then why should someone else invest their time and energy?

In the end, though, and as we ALWAYS suggest, if you have serious reason to suspect your well water or municipal/public water supply may have become contaminated, seek the expertise of a certified water testing laboratory such as National Testing Laboratories.