Simple Test for Nitrates and Nitrites in Water

Nitrite: The nitrite ion is NO2. The anion is bent, being isoelectronic with ozone. More generally, a nitrite compound is either a salt or an ester of nitrous acid. ( source )

WaterWorks™ Nitrate / Nitrite (as Nitrogen) test strips make in-home and field testing for nitrates and nitrites in water a fast, easy process. This product requires no tablets, powders, or counting of drops… making it well-suited for on-site well testing or the occasional testing of drinking water at home.

Each bottle of WaterWorks™ Nitrate / Nitrite test strips comes with a total of (50) fifty nitrite tests and (50) nitrate tests. 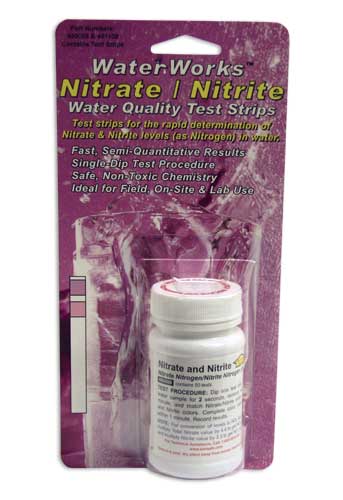