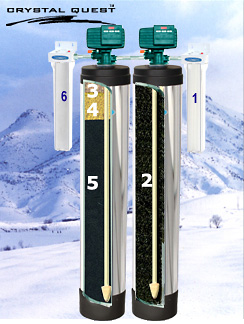 Testing for Metals in Drinking Water

Everyone knows that water has the potential to carry a great number of things that can make us sick.  Water makes its way around the world picking up bacteria, man-made chemicals and other nasty things. . . but did you know that it also picks up and transfers metals that can cause birth defects, premature birth of babies, life-threatening conditions in adults, and other problems?

What metals could do all that?  Scientists debate that question quite often, but the point of the matter is that you don’t want ANY of the metals, debated or otherwise, in your water.

Metals find their way into your water supply in a number of ways.  While the water may have left its source (well, city reservoir, etc.) w/o metals in it, the instant it touched ANY metal it automatically picked up some ions — especially if the water had an unusually high or low pH for any reason.

Even if you think your house has all (new) PVC fittings and piping, keep in mind that your water provider does not use PVC piping to run the water from itself to your doorstep.  Oh, and those metal fittings called ‘faucets’ and the screens inside them contain metal as well. (reference)

So as you can see, consumers ought to consider doing a general test for metal ions their drinking water.  Critters such as aluminum, lead, cadmium and so forth can pop up from a number of sources and according to the United States Environmental Protection Agency and Health Professionals worldwide, people need to limit the amounts of metals they ingest.

Simple Test for Metals in Water:

Just a few short years ago consumers had to rely upon the ‘wisdom’ and ‘training’ of water system consultants (salesmen!) to tell them if they had metals in their drinking water. . . or they could shell out some serious dough and send their water off to a local lab for a complete and thorough analysis — which would tell them more information than they needed, yet probably wouldn’t tell them anything they could use to decide if they had problems with their water.

Thankfully those days have come to an end.  Consumers now have the option of testing their own drinking water for metals at a cost they can afford, and with an amount of ease they can tolerate.  A simple dip-n-read test strip for metals in water that detects levels as low as 10 ppb (typically reverse osmosis water is at this level or lower) and as high as 1,000 ppb (1 ppm) is readily available from a number of vendors.

While SenSafe(TM) Water Metals Check will not tell you specifically what metals your water contains, it will let you know that you may have a reason to have your water looked at by a water industry professional.