Today’s question about testing for manganese in water came to us from ‘Blair’ who asked, “Can you please verify if the Metal Check test strips will detect Manganese? Thank you.”

Good evening, Blair, and thank you for your inquiry.

Yes, the SenSafe Heavy Metals Check product should detect dissolved Manganese since it typically has a +2 valence state for its electrons BUT do keep in mind that other dissolved metals, if present in your samples, will also yield positive results and the test kit will not differentiate between (or identify) the metals it detects.

If you require a more manganese-specific test kit, then you may want to consider the SenSafe Manganese Check product which includes interference masking agents on each strip to reduce false positive readings given by metals other than Manganese.

Normally if a homeowner finds that he or she has a higher than desirable level of ANY metals in his or her water, regardless of the metals’ identities, that person typically seeks out additional, more qualitative (i.e. laboratory) testing so that a decision regarding what filtering solution will work best for their unique water quality situation can get made.

In the event that you do decide to seek out laboratory testing, we suggest first contacting your local health department to get a list of qualified water testing labs in your area. If that does not work then we suggest considering one of the WaterCheck Test Kits manufactured by National Testing Laboratories. 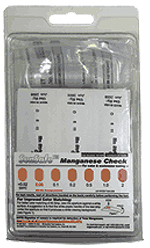