Half of Students Cannot Identify the Atoms in Water — Scary!

It frightened us to learn that nearly half of eighth graders all across the country cannot correctly identify the atoms in a water molecule. How can we expect today’s youth to care about the quality of water they ingest through out their lives if they can’t even figure out what atoms make up water in the first place?!?

Barely half of New York state’s public school eighth graders were able to correctly identify the atoms in a molecule of water on national science exams last year, test officials said this morning.

Just 54 percent of students here picked the correct combination — 2 atoms of hydrogen and 1 of oxygen — out of four options given for a multiple-choice question on the 2011 National Assessment of Educational Progress.

The same percentage of students nationally got the right answer. ( source )

If you have a young child PLEASE take the time to teach them about basic topics like what elements make up the chemical equation for water: H2O. Two hydrogen molecules and a single oxygen molecule. 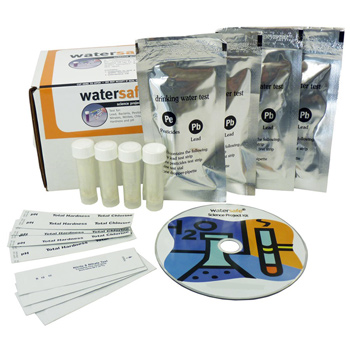 Despite the fact that half the students could not answer such a simple question about water, some students out there know a LOT about water because they have worked with test kits like the Science Project Kit manufactured by WaterSafe.

The WaterSafe Science Project Kit gives young scientists the ability to test different samples of waters, or the same sample at different times, for critical water quality parameter and compare the results to each other and to established or expected values.

Now that school has started many students and parents have realized that a science fair looms in the near future… and the SMART ones have started looking for ideas already. The rest will wait until the last minute and wind up putting a bunch of ants in a jar and say they started an ant farm.

We recently received an email from a parent whose son and friend want to perform arsenic testing on a number of water samples in their area and chart the results.

My question: My son and a co-student are wanting to do a science fair project on arsenic in the ground water. We wanted to check many samples. However, the cost of the kits are prohibitive. Is there a way that the cost of the kits may be reduced for such an endeavor?? (we wanted to use the 100 sample kit.) We would love to use your product and have it on display for the project. Please let us know if this is a possibility.. thank you so very much.

It pleases us to hear that some youngsters have taken an interest in doing a lot of ground water testing for arsenic using an Arsenic Quick Test Kit… because we know they work very well, do not require special training to use, and use safer reagents compared to other home arsenic test kits currently available on the market.

Having spoken with members of that company’s staff on numerous occasions, we can assure you that other people have successfully used versions of their field-ready arsenic test kit in science fairs in the past and done quite well.

UPDATE (8/14/2013): Previously we reported that we did not carry the Arsenic Quick Test Kit, but that has changed and the price for smaller versions as well as larger version of the product have all gone down since we first posted this article… almost three years ago!

In addition to full-sized arsenic test kits, we also now carry 2-test and 5-test versions of the Arsenic Quick as well as a version designed specifically for testing wood samples for arsenic.

If memory serves us right, a student won some sort of National Award using an Arsenic Quick test kit.

Not all students have access to well water or surface water… but that does NOT mean they can’t use water testing as the basis of their science project. Why? Because even tap water varies from place to place and in some places its quality may vary on a daily basis.