We had a feeling that chromium would pop back up in the news again… and this time residents in the Chicago area had the (dis)pleasure of finding out that recent test result showed the presence of an unhealthy level of a heavy metal (chromium) in their water supply.

Chicago’s first round of testing for a toxic metal called hexavalent chromium found that levels in local drinking water are more than 11 times higher than a health standard California adopted last month.

But it could take years before anything is done about chromium contamination in Chicago and scores of other cities, in part because industrial polluters and municipal water utilities are lobbying to block or delay the Obama administration’s move toward national regulations. ( source )

As some of you may recall, we wrote about chromium showing up in drinking water in the past and from the sounds of things we will very likely find ourselves writing about it many more times.

The discovery of hexavalent chromium in drinking water is renewing a debate about dozens of unregulated substances that are showing up in water supplies nationwide. Potential health threats from many of the industrial chemicals, pharmaceutical drugs and herbicides still are being studied, but researchers say there is strong evidence that years of exposure to chromium-contaminated water can cause stomach cancer.

Test results obtained by the Tribune show that treated Lake Michigan water pumped to 7 million people in Chicago and its suburbs contains up to 0.23 parts per billion of the toxic metal, well above an amount that researchers say could increase the long-term risk of cancer. ( source )

For those of you not familiar with the articles previously written about chromium in drinking water on this site, the following links will really come in handy:

We have written more, but the ones above ought to give you a pretty good understanding of the chromium in drinking water situation facing many areas of the United States. Water supplies previously deemed ‘safe’, and we include both municipal and private water supplies in this statement, have come under new scrutiny and many do not measure up to the current quality standards.

Speaking of tests, can the average person test for chromium in drinking water? Of course they can — but as always the best testing solution comes in the form of analysis by a certified water testing laboratory.

If, however, you would like a fast and easy method to test for the presence of chromium in water, you will definitely want to take a look at the chromium test strips produced by SenSafe. They make field testing for hexavalent chromium in water a simple and inexpensive process.

Industrial Test Systems, Inc. (ITS), located in Rock Hill, SC, recently announce the release of its new WaterWorksTM Total Iron visual test which detects ferric (Fe+3) as well as ferrous (Fe+2) forms of iron. They developed this test to make accurate total iron testing easier and possible without the use of a meter. Test times range around 3 minutes or less and require a very simple test procedure. See below: 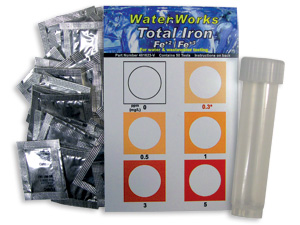 National Secondary Drinking Water Regulations, as set forth by the USEPA, recommend an iron level of no more than 0.3 ppm. Detection levels for the WaterWorksTM Total Iron visual test are 0, 0.3, 0.5, 1, 3, 5 mg/L (ppm). The test kit contains 50 individually wrapped foil powder pillows, a test vial with cap, and a color chart card — everything you need to detect total iron in drinking water.