Do You Offer a Test Kit for Trihalomethanes?

Earlier this week we received an inquiry from 'Stuart' who asked, "I would like to test the water at home for trihalomethanes. Is this something you do and can you provide me with the associated costs."

Good afternoon, Stuart, and thank you for your inquiry.

Due to the nature of the testing and low quantities of THM's one could expect to find in drinking water, not simple at-home test kit for THM's exists -- that we know of. Testing for THM's takes place in a laboratory environment.

FYI: As a general rule it takes about 10 business days to get test results back from NTL (National Testing Labs) and the cost of each testing package depends upon the number of different water quality parameters the kit contains.

OK, so where do THM's come from?

Trihalomethanes (THM's) fall into a classification of drinking water contaminants known as disinfection byproducts, or DBP's.  Contaminants of this nature form when disinfectants such as chlorine get added to water that contains organic matter.

What removes or reduces levels of THM's in drinking water?

For information on water filtration systems capable of eliminating harmful levels of THM's, we suggest taking a look at water filtration options that contain Granular Activated Carbon (often abbreviated as GAC).  You can find a number of different filter brands and types on the following sites: FilterWater.Com, FiltersFast.Com and Filter-Drinking-Water.Com.

As the debate over the benefits and problems associated with use of free chlorine ( EPA Approved test strip for free chlorine ) as a disinfectant in public and private drinking water systems rages on and more people become aware of compounds known as disinfection byproducts, the desire for point-of-use water filtration systems capable of removing disinfection byproducts continues to grow.

One particular disinfection byproduct of, trihalomethanes (often abbreviated as THM’s or TTHM’s), has gained enough notoriety that companies like PUR have started certifying some of their products to NSF/ANSI Standards for the reduction of trihalomethanes in drinking water.

Below you will find a list of several PUR water filtration products that have tested and certified to NSF/ANSI Standard 53 (Drinking Water Treatment Units – Health Effects) for the reduction of TTHM’s and other unwanted drinking water contaminants:

For those unfamiliar with how trihalomethanes get into drinking water, they get created when free chlorine molecules attack, neutralize and become entangled with a biological contaminant. That process chain of events converts free chlorine into combined chlorine and in the process disinfection byproducts get created.

What harm can trihalomethanes in drinking water cause?

Four different trihalomethanes can form as a result of chlorination: Chloroform, Bromodichloromethane, Dibromochloromethane, and Bromoform. The United States Environmental Protection has found that excessive exposure to these compounds has resulted laboratory rats developing cancer.

While many scientists may disagree on the exactly how much exposure to each compound constitutes overexposure, we think it wise to keep tabs on your local water treatment system’s track record of trihalomethane level management (data available in annual reports) and if deemed necessary, install an NSF certified water treatment system capable of reducing trhalomethane levels.

KC had a few questions for us and wrote…

I have 2 questions that I am not finding answers to on this blog. I could be overlooking the answers. 1) is there a home test kit for THM’s and HAA5? 2) I purchased some property & I would like to test a pond on the property for contaminates other than the drinking water quality home test kit variables such as fossil fuel/petroleum contamination and other pollutants.

For those who do not know, THM’s stands for trihalomethanes and HAA5 stands for haloacetic acid. Both compounds fall in the category of disinfection byproducts, or chemical products created when a disinfectant acts on a contaminant in water. In recent years health officials have determined that exposure to these compounds can increase a person’s risk of developing cancer.

With regard to KC’s question about THM and HAA5 test kits, we do not know of any at-home drinking water test kits for these compounds. Testing for disinfection byproduct levels requires a laboratory environment.

If you wish to test for these two compounds you will have to use a kit that you mail into a certified drinking water testing laboratory such as National Testing Laboratories. Within about (2) two weeks after receiving your water they will issue a lab report telling you all sorts of interesting things about your water — including how many disinfection byproducts your water contains, if it has any at all.

Worried about other things such as pesticides, herbicides and PCB’s? National Testing Laboratories offers a water testing option that includes all of the above tests plus an an additional check for (20) pesticides, herbicides and PCB’s. They gave it a really long name, WaterCheck with Pesticides Laboratory Analysis Water Testing Kit, and it test for a total of 97 different water quality parameters. 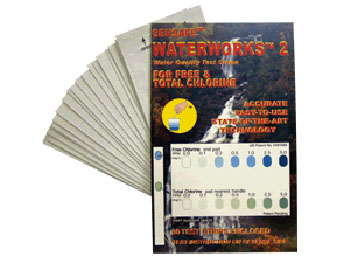 While oxidizers such as chlorine, bromine and chlorine dioxide do an excellent job of cleaning up water so that it contains no microorganisms and/or harmful strains of bacteria, their success as disinfectants does not come without a price.

Byproducts of the chemical reaction between the ‘bad’ components and the oxidizers form each time one of those ‘bad’ components gets eliminated and we call the disinfection byproducts. See below for a list of the ones listed in the National Primary Drinking Water Regulations for Disinfection ByProducts along with their MCL’s (Maximum Contaminat Levels) and potential hazards to humans: