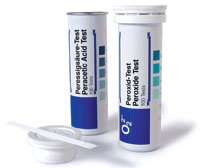 Peroxides formed in/over organic solvents can lead to very dangerous, explosive situations and although we will now discuss (briefly) a testing method for peroxides in organic solvents, we suggest that all parties concerned over such matters consult with the manufacturer(s) of their chemicals for better, more detailed testing, storage and safety information.