As an example, in the State of Georgia, local water departments must conduct lead in water and copper in water testing in a select number of customer homes every three years.

The Polk County Water Authority will be sending out letters this week to homeowners it wants to participate in its water-testing program, according to an authority official.

Authority Manager Jack Damron said the effort is to get back into compliance with the Georgia Environmental Protection Division.

Polk County is required to submit water samples from inside homes of randomly selected properties every three years. The testing is to monitor lead and copper, according to Damron.

The county missed the last testing period. However, Damron said no fine was issued.

“Our position is the state never sent us the bottles to use,” Damron said, referring to the specific sampling bottles needed.

Damron, who has been in his position for about two months, said the issue is one of testing compliance and not of water pollution.

“If we believed there was a more serious issue with water itself, we would have sent out a different notice,” he said. ( source )

As always we applaud any government agency’s efforts to ensure citizens have safe, clean drinking water. In this case, though, we give only half a clap.

Why only half a clap? Simple: The excuse of ‘the state never sent us the bottles to use’ does not hold much water. Pardon the pun.

Officials in Polk County KNEW testing needed to get done and KNEW, we imagine, the phone number of the State Agency responsible for distributing the required test vessels for the lead and copper testing. For them to say they should absorb no blame for the testing not getting done rubs us the wrong way.

Question: Where Can I Get Lead in Water Test Kits?

Craig wrote in and asked…

Do you have a lead test kit or can recommend a company that I can valid results in less than a week? We have used a service before, but it took nearly two weeks.

With that said, you have a few options when it comes to testing for lead in drinking water. Both WaterSafe and WaterWorks manufacture lead in water test kits and both, from what we can tell, contain the same type of test… just one has a bit less flashy packaging.

Lead Levels Thought Safe May Not Be Safe After All

Once again we have stumbled across information about the dangers of lead exposure. While not specifically related to lead in drinking water, a common source of lead exposure, the information did catch our attention and we think all parents and care providers for children should know about.

Lead levels below the ‘accepted safe’ limit of 10 µg/dl in the blood of children may have damaging effects on their intellectual and emotional development. ( source )

Back in the early 1990’s the United States Center for Disease Control set the action-level for lead levels in blood at 10 µg/dl and since then evidence has come to light that levels a lot lower may cause irreversible damage to children’s nervous system.

The more we read about the dangers of lead exposure the more strongly we feel about making sure the water we drink and serve our children contains as few contaminants (like lead) as possible. We also think it very wise to test the paint on (older) children’s toys and on surfaces in the home.

Why? Simple: The United States Center for Disease Control and the United States Environmental Protection Agency have not always viewed lead as a toxic compound and at one time it existed in many forms and in many places in our everyday lives. Not all of those lead-containing items have found their way to facilities for proper disposal yet. others have already found ways to pollute our drinking water sources w/ their toxins as a result of improper disposal in landfills or illegal dump sites.

Recent advances in the field of heavy metals testing have made it possible for the average person to test for lead in paint, lead in water, and even lead in themselves quite easily, conveniently, and without spending hundreds of dollars.

Oh, and you don’t have to have a degree in chemistry, either!

With all the recent news about the dangers of Lead in Water many people have gone to see their family physician to request a test for lead to make sure they have not somehow become an unknowing receipient of excessive lead exposure.

Several members of the Water Testing Blog staff fear needles a lot more than they ought to and would not ever consider getting tested for lead exposure — because of their terrible fears.

Recent breakthroughs in non-invasive testing using saliva have made it possible for even the needle-fearing cowards on our staff to get tested for lead. 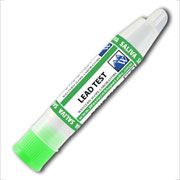 As stated by Test Country, a popular and trusted distributor of the Saliva Lead Detect Home Test…

“While the effects of lead poisoning are very serious, children are most significantly affected by this heavy metal, which is toxic to the human body. Prolonged exposure to lead can cause health complications, which may be irreversible once the damage has been done.”

“The Lead Detection Saliva Test, a self-collected laboratory test can determine the level of lead in your body. Simply swab the inside of your mouth and send your saliva sample to the lab for analysis. Our CLIA Accredited Laboratory uses state-of-the-art Liquid Chromatography (HPLC) with Mass Spectrometry X2 (LC/MS/MS) technology to determine the amount of lead present. Results are available in 2-3 business days.”

The Point of All This?

Health officials and medical experts around the world agree that lead causes harm in the human body and that we come into possible contact with lead many time throughout our life.

And now, without the need for needles or costly bloodwork, everyone has the abilty to get themselves and their loved ones tested for accidental lead exposure using the Saliva Lead Detect Home Test.