Most ‘health’ issues stemming from contaminated well water did NOT have to happen so we really like hearing from people interested in getting their well water tested — hopefully BEFORE anyone has gotten sick from the water.

Today we heard from ‘Ilija S’ who asked, “Who do we contact to get well water tested?”

Hello, Ilija, and thank you for your inquiry.

Please keep in mind that if you have reason to suspect well water contamination, you should always defer to the expert testing services of a qualified, certified water testing laboratory; preferably one in your immediate area since their staff will know more about the intricacies of your local water situation than a laboratory located in a different city, county or state.

For spot testing of basic water quality parameters, test kits such as the WaterSafe Well Water Test Kit or SenSafe Water Quality Test Kit work quite well… but they do not test for more complex, man-made chemicals such as VOC’s (volatile organic compounds).

If you want a more thorough analysis that includes things like pesticides and volatile organic compounds, you may want to take a look at test kit options like the National Testing Labs Mail-In Water Testing Kit that includes a number of commonly found pesticides and different VOC’s.

We hope this has helped at least a little bit!

We have written about the importance of testing ground and well water before, during and after hydraulic fracturing many times in the past and will more than likely continue to do so for a long time to come. The potential (and real!) dangers posed by the injection of such large quantities of mysterious chemical cocktails deep into the Earth warrants our doing so.

why is the cost so high to test water for fracking contamination? after the recent flooding it only cost $25.00 to see if the well water was safe to drink. is it best to have a local company test the water or should we send it to Penn State or out of state? how often after the drilling starts do you recommend water to be tested?

Thank you for this question, Terri, and we bet other folks facing the unwanted financial burden of paying for more ground/well water testing than the average homeowner with a well have wondered the exact same thing.

In our experience, well water testing that costs roughly $20 to $30 usually includes the following tests: Nitrates/Nitrites and Coliform Bacteria.

From the very beginning companies that used hydraulic fracturing as a means of extracting natural gas from rock and shale formations deep in the Earth have kept the list of ingredients in their fracking fluids out of the public eye.

However, according to information posted on Wikipedia (10/28/11)…

“Chemical additives used in fracturing fluids typically make up less than 1% by weight of the total fluid. They are biocides, surfactants, adjusting viscosity, and emulsifiers. Many are used in household products such as cosmetics, lotions, soaps, detergents, furniture polishes, floor waxes, and paints.[33] Some are also used in food products. A list of the chemicals that have been used was published in a U.S. House of Representatives Report.[34] Some of the chemicals pose no known health hazards, some of the chemicals are known carcinogens, some are toxic, and the health hazards for the rest are unknown. The report does not include the concentration of each chemical used or the amount used.

A 2011 study identified 632 chemicals used in natural gas operations. Only 353 of these are well-described in the scientific literature; and of these, more than 75% could affect skin, eyes, respiratory and gastrointestinal systems; roughly 40-50% could affect the brain and nervous, immune and cardiovascular systems and the kidneys; 37% could affect the endocrine system; and 25% were carcinogens or mutagens. The study indicated possible long-term health effects that might not appear immediately. The study recommended full disclosure of all products used, along with extensive air and water monitoring near natural gas operations; it also recommended that fracking’s exemption from regulation under the US Safe Drinking Water Act be rescinded.[35]”

With the number of chemicals and ‘other things’ possibly present in fracking fluid, and the mystery surrounding many of those additives true identities, responsible testing laboratories must use a shotgun approach when analyzing samples for the fracking fluid… because they have no solid idea of what exactly to look for.

The Best way to Test for Fracking Fluid?

Terri mentioned Penn State in her inquiry and at this point we feel the scientists at Penn State may very well have the best idea of what has transpired in that region due to their close proximity and the amount of time and resources that institution has dedicated to tracking the activities of gas drilling companies in the area.

Moral of the Story?

If companies intend to begin hydraulic fracturing in your area then you really ought to have the quality of your water tested before, during and after drilling.

If companies have already started drilling and you have not, yet, had a qualified water testing lab analyze your water, you really ought to have that testing done right away.

Question: When Disinfecting My Well, How Do I Know That I’ve Put Enough Chlorine Bleach In?

We may have addressed this matter in the past, but we would rather repeat ourselves a dozen times on a topic like this than have people not properly disinfecting their wells. 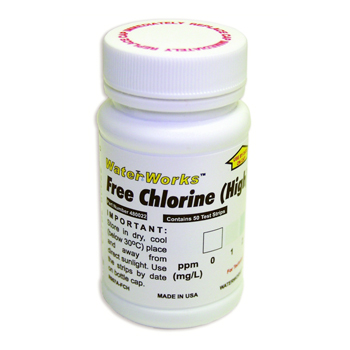 Today’s inquiry comes from ‘DdavidD’ who asked, “Hi hope you can hlep. We got a well bleach kit from the hardware store to clean our well and want o know how we know when enough has been added. Directions tell us to test but what do we test with? Thanks”

Most kits for disinfecting a well contain instructions for properly using their contents and we HIGHLY suggest that you follow the darn things — else risk using too little and not getting the job done or adding too much and risk damaging your well equipment.

Most kits will recommend maintaining levels of free chlorine much higher than any DPD Reagent Based Water Test Kit can possibly detect without messy dilutions which, if not done carefully, can easily result in flawed free chlorine readings.

So… how can a person test for 20, 50 or even 100+ ppm free chlorine? Simple: SenSafe/WaterWorks manufactures a product called High Range Free Chlorine which can detect up to 120 ppm free chlorine in just a few minutes without the user needing to mix chemicals or perform dilutions.

If you need to test for even HIGHER levels of free chlorine than 120 ppm, then we suggest you take a look at the Ultra High Range II Free Chlorine Test Strips contained in the Childcare Sanitizer/Disinfectant Water Test Kit.

Don’t let the word ‘childcare’ in the name fool you. The makers of this ultra high range free chlorine test strip designed it specifically for use in average tap/well water that contains super high levels of free chlorine — up to 2,000 parts per million free chlorine!